skip to main | skip to sidebar

I sent you something earlier about the ancient form of African ape that was announced today called "Ardi." This sounds something like an orang pendek, though a bit larger.

Compare it with the orang pendek track:

Ardi's anatomy suggests that the original African apes from which we, chimps, bonobos and gorillas descend were bipedal but still had the grasping toe. Ardi was the size of a chimp, which is consistent with the description of the orang pendek that the CFZ team saw.

SUMATRA EXPEDITION IN THE DAILY TELEGRAPH

The team of four British explorers and their Indonesian guide tracked through dense and treacherous jungle in the Kerinci National Park of Sumatra where two of them caught a glimpse of the Orang Pendek - or short man.

The team have brought back hair samples and a piece of palm they hope will provide DNA evidence of the Orang Pendek - a creature sighted in the area since colonial times and reputed to be immensely powerful....

As you may have seen in the news, a massive earthquake has hit the city of Padang where Adam, Chris, Dave and I were staying just a few days ago before our return to the UK.
I have heard that the Dippo Hotel, where Chris, Jon Hare and I stayed on our 2003 and 2004 expeditions, and of which I was very fond, has been destroyed.


Thankfully Sahar and his family, and Dally and the other guides are all safe as they were well out of the area. Dally is on Facebook and I spoke to him last night. The death toll has now reached 529. Padang is not a well-built city so I can well imagine how much of it must have been flattened.

As Padang is a Mecca for surfers, a charity called Surfaid is raising money for earthquake relief. You can donate here:
http://www.surfaidinternational.org/site/pp.asp?c=ekLPK4MOIsG&b=5493943
Posted by Jon Downes at 01:52 No comments:

HOLIDAYS IN THE SUN 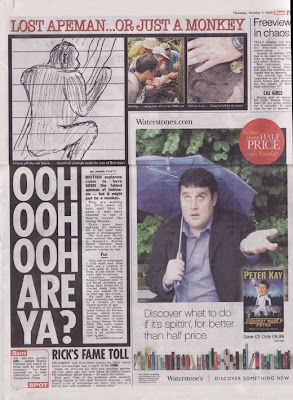 MORE LINKS TO THE SUMATRA STORY

The Centre for Fortean Zoology (CFZ), the world’s largest mystery animal research group, has made an interesting find in Sumatra....

Story at :http://parabook.wordpress.com/2009/09/29/expedition-spots-mystery-ape-in-sumatra/
Posted by Jon Downes at 02:56 No comments:

PICTURES FROM AN EXPEDITION: The Lake of Seven Peaks

Gunung Tuju or 'the lake of seven peaks', is a large, deep lake in the caldera of an extinct volcano in Kerinci National Park. It is biologicaly impoverished with only one species of fish and one species of freshwater crab. However, it is in the surrounding jungles that most orang-pendek sightings come from. In these jungles Dave and Sahar saw the creature and we found footprints, hair and chewed rattan vine.

The jungles are cool and damp, much like the one inhabited by mountain gorillas in Africa. Adam found fresh tiger tracks in the jungle and thought the beast was only a few hundred yards away from our camp.

Twice, whilst crossing to the far side of the lake, the antiquated fisherman's canoes sprung leaks and were almost swamped when the lake's waters became choppy. The holes had to be plugged with black paper bags and we had to bail out the water. 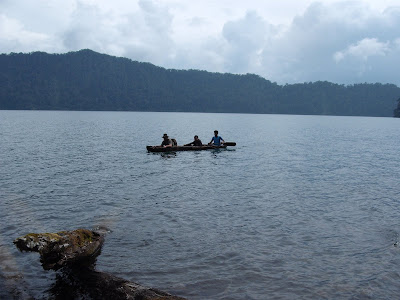 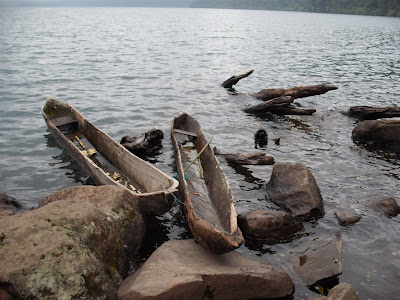 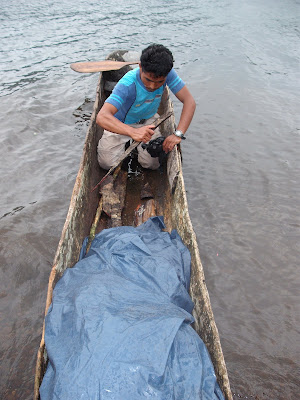 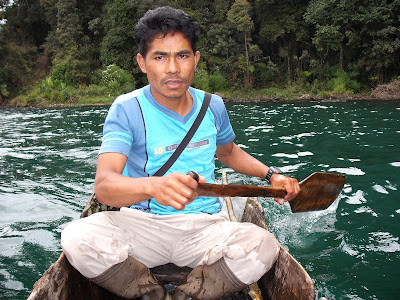 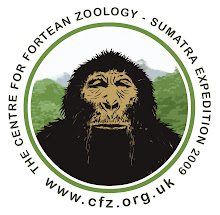